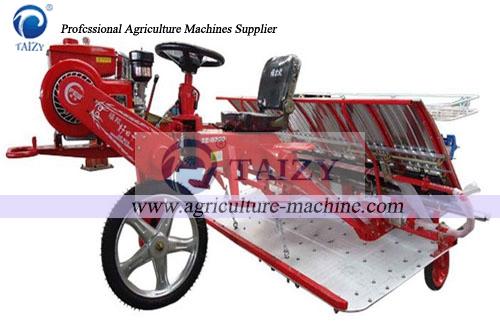 The forced feeding is carried out by the vertical feeding mechanism to regularly push the seedlings, and the feeding ability is strong, and the two are sent in the same way as the whole. The former is mainly used to bring soil seedlings. When the box moves laterally to the extreme position of both ends, the whole seedling is pushed to the door once; the latter is mainly used for pulling the seedlings, and each time the picking device is taken, the corresponding feeding is once, and the width of the feeding is equal to the sampling. The width of the device. 2 The feeding direction of the transverse feeding mechanism is perpendicular to the traveling direction of the machine, and both adopt the moving box method, which is also called the moving box mechanism. According to its movement mode, it is divided into intermittent moving box and continuous moving box: the intermittent moving box mechanism is used for extracting seedlings and soil seedlings. It is characterized in that the moving of the seedlings is stopped when the claws are taken to facilitate the splitting of the claws. The continuous shifting mechanism is to make the horizontal and continuous constant speed movement of the box in the operation, and automatically shifts to the limit position at both ends. Therefore, in the branching stage, the jaws and the box are relatively moved, which is suitable for the soil seedlings.
The above is the delivery mechanism of the rice transplanter. Please contact us if necessary.