Corn peeling and grits making machine is to peel corn and then process it into three different shapes, namely large corn grits, small corn grits and corn flour. The machine is compact in structure, simple in operation, and it is energy-saving, efficient and durable. 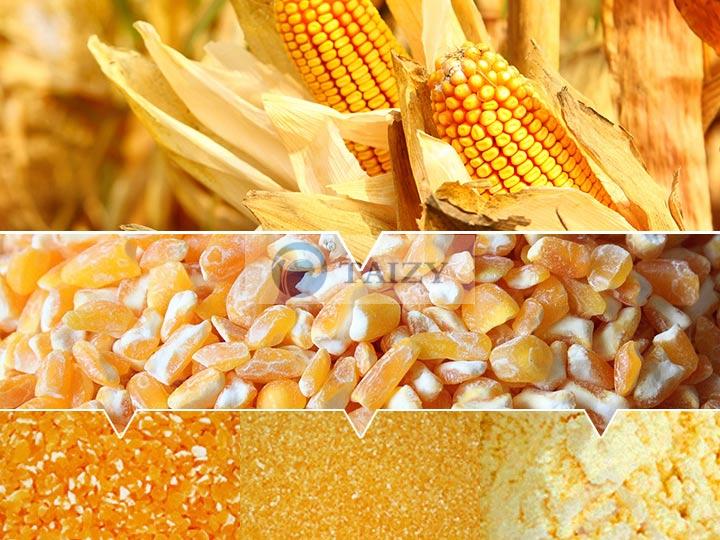 The peeling system is composed of a feeding device, a shell breaking and whitening device, bran separation device, and an automatic adjustment system for the discharge. (1) The feeding device is composed of a feeding hopper, a hopper seat and an insert plate. The hopper is used to store a certain amount of corn, and makes the corn enter the peeling room by gravity. The flow rate of the materials is controlled by the inlet gate.

(2) The peeling device is mainly composed of the discharge hole, the fuselage, the reduction box, the fan, the tensioner, the bran hopper, and the bran collector etc.

corn can be divided into three ways for different degrees of processing.

It is composed of fans, air ducts, and dust collectors.

It is composed of international high-quality angle steel and channel steel, and it is made through many processes such as cutting, chamfering, and precision welding etc.

After the corn enters the dehulling room from the hopper, it moves toward the exit under the rotation and push of the propelling ribs. In the peeling room, due to the gradual reduction of the volume of the working room and the influence of the resistance of maize grinding machine, the density between the corn decreases, and the pressure increases accordingly. The squeezing and friction of corn in the maize grinding machine is strengthened. With the continuous advancement of the roller, the friction and stripping are continued to gradually remove the corn. The corn kernels,  and bran skins achieve the effect of automatic separation, and the finished peeled corn flow out through the discharge port. The bran skin is discharged from the other outlet.

The cleaned corn kernels are poured into the grinder hopper, and they move forward through the traction clutch crusher. Later, they will be crushed. The crushed corn enters the classification system, and are separated by three separating round screens. The corn with different shape are respectively discharged from the three outlets finally. In this process, the micro-skins in corn grits are sucked away by the action of wind through the fans so as to get fine grits. You can adjust the damper to determine the wind force. The micro skins blown out by the fan can be collected with bags.

The advantage of corn mill machine

1.Unique design solves the technical difficulties such as slow removal of impurities.

2.Equipped with current display system. You can clearly see the internal pressure of working room and the peeling effect of corn.

Note: before using this machine,it is necessary to buy a corn seller machine.

How to adjust pumpkin harvester?

Do the following to improve grits making machine efficiency